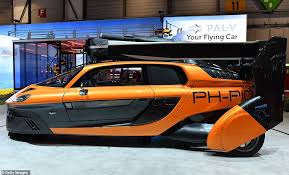 It has been over century in the making, but the world's first 'fly and drive car' is set to make its US debut Tuesday night in Miami, Florida.

Called Pioneer Personal Air Landing Vehicle, or PAL-V, this flying vehicle is equipped with retractable overhead and rear propellers  and can cruise at an altitude as high as 12,500 feet.

It uses automobile gasoline and tops speeds of 200 miles per hour in the air and 100 mile per hour on the ground.

The Dutch-made machine is already in production and is selling for $599,000 with 70 pre-orders to-date - the first delivery is expected to be in 2021.

PAL-V will go on display at an event entitled: 'Miami 2020 and Beyond'.

The flying car seats two people has 230hp and a four-cylinder engine.

The two-seater vehicle converts from a three-wheeled car to a gyrocopter in just 10 minutes, and can go from 0 to 60 mph in under eight seconds.

Maxim magazine selected PAL-V in 2017 as the most likely company to deliver a 'real' flying car and two years later that prediction has come true.