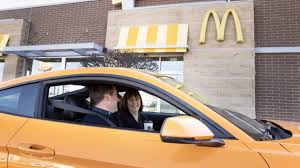 McDonald's serves over a billion cups of coffee a year. That's 2.5 million cups a day, requiring the assistance of thousands of coffee plantations worldwide to source the beans. It also, naturally, means there's a lot of waste. Specifically, the skin of the coffee—known as the chaff—must be stripped away before grinding and brewing. Coffee roasters produce 1.2 million pounds of chaff a week in North America alone, a massive pile of organic matter that can sometimes be composted but is often simply burned.

Most of us don't think about the waste that every cup of coffee brings into the world. Debbie Miewelski, Ford's senior technical leader of materials sustainability, didn't either—until one morning when she was walking into her lab with a coffee in-hand, as per usual. "I realized there must be some waste associated with this cup!" she says. "I asked my team to dig into what could be reusable, and after some research they said the chaff of the coffee bean could be a good material for us to work with."

Shortly thereafter, Ford began talking to McDonald's about all that coffee by-product. The companies share common interests in this area—both are members of the of the World Wildlife Foundation's Bioplastic Feedstock Alliance, which prioritizes working plant matter into plastics. Soon, Miewelski started tinkering with chaff in the lab along with her team. And with some help from partners and suppliers in the auto industry, they realized they could heat the chaff in a low-oxygen environment, then mix it with plastic to create a strong, heat-resistant composite. That composite makes it the perfect material for a car's headlamp—one that's 20% lighter than what Ford was using before, which shaves about one pound off the car, improving fuel economy as a result.