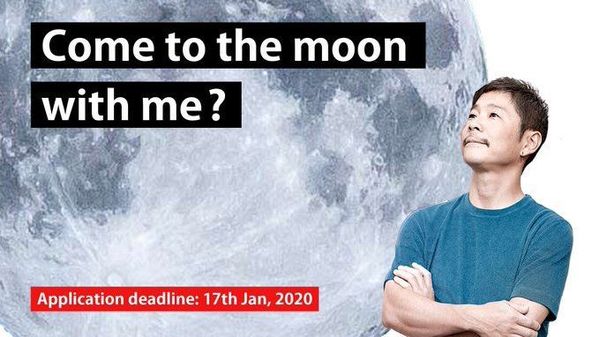 An eccentric, lonely Japanese billionaire planning to fly to the moon on Elon Musk's rocket is looking for the love of his life to join him on his journey. He just hasn't found her yet.

Yusaku Maezawa, the first paying passenger on SpaceX's maiden tourist voyage to the moon in 2023, tweeted a link Sunday to a website where women can apply to be his companion on the week-long space flight.

"I'm 44 now," Maezawa said on the website. "As feelings of loneliness and emptiness slowly begin to surge upon me, there's one thing that I think about: Continuing to love one woman."

According to the website, Maezawa will begin considering the applicants by the end of the month, and a final decision will be made by the end of March. The deadline to apply was listed as Jan. 17. The post was retweeted more than 10,000 times, including by Musk.

The selection process won't be discreet. Maezawa has commissioned a documentary by AbemaTV, called "Full Moon Lovers," to be produced.

"With that future partner of mine, I want to shout our love and world peace from outer space," Maezawa said.

Maezawa has a net worth of US$3.6 billion, according to the Bloomberg Billionaires Index. He skipped college, moved to California to play in a rock band and started his own e-commerce company, Start Today Co. After making his fortune, he started investing hundreds of millions of dollars on artwork.

New Earth-Like Planet Found In Habitable Zone Of Nearby Star

Largest rocket since Apollo rolls out