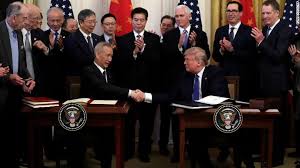 Donald Trump took a victory lap on Wednesday as he signed a trade deal with China at the White House as his impeachment sped towards the Senate on Capitol Hill.

He boasted to an audience of dignitaries that a new trade deal with China will bring 'a future of fair and reciprocal trade,' then complained about the 'impeachment hoax,' and praised a string of Republican senators who he needs to vote for his acquittal.

The president has long complained about a massive trade deficit between Washington and Beijing. He pledged during the 2016 campaign to come down hard on China.

'We are righting the wrongs of the past,' he said Wednesday, observing that 'our negotiations were tough, honest, open and respectful.'

'This is the biggest deal anyone's ever seen,' he said, because 'China has 1.5 billion people.'

The president spent nearly a half-hour acknowledging business leaders and lawmakers who crowded into the East Room to watch. And he noted that some House members might have to leave early in order to vote on a motion to send articles of impeachment to the U.S. Senate.