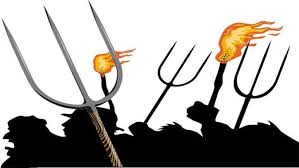 King had preached that there was a higher law that justified breaking existing laws that mandated racial segregation.

When Rosa Parks refused to give up her seat in the front of the bus in Montgomery, when Freedom Riders integrated bus terminals, when black students sat at segregated lunch counters in North Carolina, they challenged state law in the name of what they said was a higher law.

And Virginia gun owners believe their moral obligation to protect families, friends and themselves in a violent society justifies their right to keep and carry firearms, no matter what the Virginia legislature says.

Americans have a long history of breaching laws in the name of a higher law or God-given rights.

The patriots of Boston gathered an arsenal at Concord in defiance of the British. To protest a tea tax imposed by parliament, they dressed as American Indians and threw shiploads of imported tea into Boston Harbor.

Abolitionists supported the violation of fugitive slave laws, the enforcement of which Lincoln endorsed in his first inaugural as a national necessity to restore and preserve the Union.

A constitutional prohibition of the sale of beer, wine and liquor in the U.S., following the enactment of the 18th Amendment, led to massive civil disobedience in the Roaring '20s, before it was repealed in 1933 by the 21st Amendment.

During Vietnam, burning draft cards was a regular feature of anti-war rallies.

Historians may describe the racial riots of the 1960s — Harlem, Watts, Newark, Detroit, and 100 U.S. cities including Washington, D.C., after King's assassination — as popular uprisings, but many required National Guard and federal troops to stop the looting, shooting and arson.

This week, Washington hosts the 46th annual March for Life to commemorate the 60 million unborn killed in the abortion mills of America since Roe v. Wade in 1973.

In conservative states, restrictions imposed on abortion facilities have put some out of business. The legislators and governors who have done so believe the right to life trumps the Warren Court ruling in Roe v. Wade.

Perhaps the greatest manifestation of civil disobedience today is the illegal presence of between 12 million and 20 million immigrants who broke into our country or are breaking the law by being here after their visas expired.

1 Comments in Response to Is Mass Civil Disobedience Our Future?

No. Those who want our obedience are uncivil, so mass uncivil disobedience is our future.