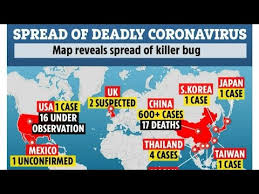 (Natural News) With the first confirmed coronavirus death now recorded outside of China, and with confirmed infections rapidly accelerating across 18 nations, it is becoming increasingly obvious to intelligent observers that the coronavirus pandemic cannot be contained.

The total number of confirmed infections has now skyrocketed past 14,000, with over 300 confirmed deaths and likely thousands more deaths being covered up by the communist Chinese government.

The World Health Organization today issued an urgent warning that this pandemic looks set to go global, urging all the nations of the world, "to be ready for a domestic outbreak."

That warning from the WHO follows the publication of an alarming new study in The Lancet which warned that, "Independent self-sustaining outbreaks in major cities globally could become inevitable because of substantial exportation of presymptomatic cases and in the absence of large-scale public health interventions."

With the coronavirus rapidly spreading outside of China, the window of opportunity to prevent this outbreak from going global is collapsing by the hour, and the chance of success against the virus is rapidly plummeting. Once the virus manages to achieve self-replication outbreaks in a place like Thailand or India, it's almost certain to be impossible to contain on a global scale.

And that means, sooner or later, the outbreak reaches Mexico.

Can North America isolate itself from the rest of the world? Probably not…

In every outbreak, the first thing every government tries to do is quarantine the truth and deny reality. This caused China to avoid admitting to their own knowledge of human-to-human transmission in December, when the outbreak could have been more easily contained. In the United States, the lying left-wing media is also downplaying the pandemic, hoping to "prevent panic," even at the cost of keeping people so ignorant that they will fail to protect themselves from infected carriers. The left-wing media, after all, really is the "enemy of the People" and now, they're proving they are the enemy of humanity on a global scale.