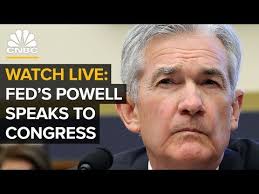 The Fed chief will answer questions from lawmakers following his prepared remarks. He's also scheduled for a hearing before the Senate Banking Committee at 10 a.m. Wednesday as part of his semi-annual testimony to Congress.

In his prepared remarks, Powell provided a mostly positive picture of the U.S. economy but raised the specter of coronavirus' impact on the world economy and additionally warned of slowing its liquidity bailout program.

And as far as what is to be expected, it's anyone's guess given that "mad" Maxine Waters is in charge... but,as Marc Chandler detailed earlier, three general issues appear to be the focus.

First is the economic impact of the coronavirus. Yesterday, both Daly (non-voter) and Harker (voter) still were emphasizing the "good place" that the US economy was in, suggesting no change in their stance. However,  Powell may be a bit more balanced and highlight the international risks, which were the basis of the argument for easing last year.

Second, Powell may discuss the Fed's operations aimed at ensuring a smooth transmission of its policy, which has resulted in repo operations and $60 bln a month of T-bill purchases. Powell may help explain why this is not QE, and the actions have kept financial market conditions broadly stable and supportive.

Why QE Is Not Working

Despite QEternity & "Record" Bailout-Bill, The US Dollar Shortage Is Intensifying...