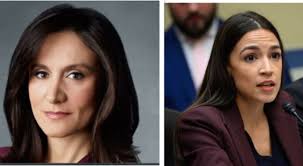 The Democratic diva and self-proclaimed 'Democratic Socialist' has been out campaigning for Bernie Sanders in recent weeks as one of his top surrogates. But back home, a challenge is brewing, as Michelle Caruso-Cabrera, a popular anchor on CNBC, has filed paperwork to challenge the 29-year-old lawmaker during this year's Democratic Primary.

Being a member of the House, AOC is obligated to defend her seat every two years. She famously knocked out Joe Crowley, the chairman of the Queens Democratic Committee and a leader in the House Democratic caucus, during a 2018 upset primary win.

MCC made the announcement on CNBC, the channel where she has worked for years. In a brief statement, she cited her Italian and Cuban heritage and longstanding roots to the Bronx and Queens district that AOC currently represents, and where MCC also lives.

"I am the daughter and granddaughter of working class Italian and Cuban immigrants," Caruso-Cabrera said in a statement.

"I am so lucky to have had such a wonderful career and I want everybody to have the opportunity that I've had. That's why I'm running."

What's Next: "Italeave" Or A European Union Crack-Up?

Can 5G exposure alter the structure and function of hemoglobin...