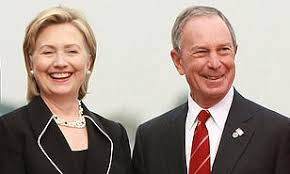 Drudge added that, as part of the deal, Bloomberg would likely change his residency, since the electoral college math would make it harder for a Presidential and VP candidates from the same state.

Sources close to Bloomberg campaign tell DRUDGE REPORT that candidate is considering Hillary Clinton as running mate, after their polling found the Bloomberg-Clinton combination would be formidable force...

DRUDGE has learned that Bloomberg himself would go as far as to change his official residence from New York to homes he owns in Colorado or Florida, since the electoral college makes it hard for a POTUS and VPOTUS from the same state.

We've taken screenshots of the tweets, given Drudge's longstanding policy of deleting his tweets not long after publishing.

The news comes amid a surge in the polls that has put Bloomberg closer and closer to taking first in Florida, a key part of his strategy.

And sure, Bloomberg wasn't even on the ballot in Iowa, but who needs the electoral process when you have money and deep-state Clinton power? After all, nobody knows how to rig a primary like Hillary.