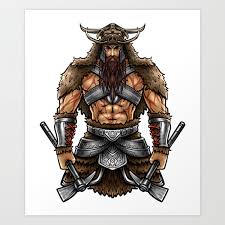 Viking warriors were fuelled by a hallucinogenic herbal tea as they went on blood-thirsty raids across northern Europe, scientists claim.

The warrior culture of the Scandinavian Middle Ages was marked by Norse skirmishes with their neighbouring communities, that often involved looting and pillaging.

Elite fighters, known as berserkers who went into battle without traditional armour, entered into a state of animalistic frenzy before fighting, according to historians.

It is said that after the battles finished their anger subsided. Now scientists believe the secret behind their fearless rampages were mind-bending hallucinogens.

Known as 'stinking henbane', which is otherwise poisonous, the plant caused the warriors to strip naked for battle and launch into a frenzied attack.

It would have made the infamous warriors unable to feel as much pain, as well as becoming 'unpredictable and highly aggressive' and causing them to 'lose touch with reality', according to researchers.

Karsten Fatur, an ethnobotanist at the University of Ljbuljana in Slovenia, said the Vikings could have made tea from the potent herb or drunk it with alcohol.