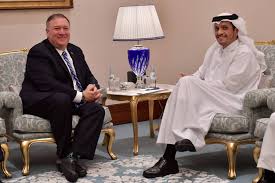 The United States and the Taliban have signed a peace agreement aimed at ending the 18-year war in Afghanistan, potentially helping President Donald Trump fulfill a key campaign promise to extract America from its 'endless wars.'

The deal was signed on Saturday in the Qatari capital Doha by U.S. special envoy Zalmay Khalilzad and Taliban political chief Mullah Abdul Ghani Baradar. U.S. Secretary of State Mike Pompeo was on hand to witness the ceremony.

Under the agreement, the U.S. will begin withdrawing thousands of troops in exchange for Taliban commitments to prevent Afghanistan from being a launchpad for terrorist attacks.

If the Taliban meet their commitments, all U.S. troops would leave in 14 months.

The U.S. invaded Afghanistan after the September 11, 2001 attacks to overthrow the Taliban, which had hosted Osama bin Laden and al-Qaida as they planned and celebrated the assault. The Taliban itself, though a violent group inside Afghanistan, isn't believed to have directly engaged in international terrorism against the West.