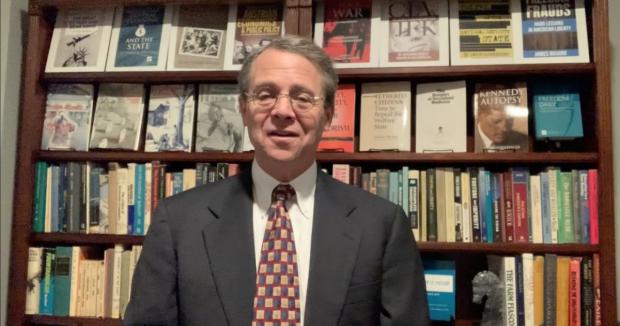 Democrats and Republicans weren't the only voters to experience the pains and pleasures of Super Tuesday—third parties, which in 2016 had their best presidential showing in two decades, were also on the ballot in a handful of states.

Libertarian Party primaries and caucuses are nonbinding, which means that no delegates are awarded based on results. As ever, candidates for the nomination of the country's third-largest party need to persuade a simple majority of the state L.P. delegates who attend the May 21-25 national convention in Austin, Texas. Still, the election results provide a snapshot of what party members are thinking less than three months out.

So far, the trend line is unmistakable—the Libertarian front-runner at this point is longtime libertarian-movement hand and Future of Freedom Foundation founder Jacob Hornberger. After previously winning the Iowa and Minnesota caucuses, and getting the second-most first-place votes in the New Hampshire primary as a write-in, Hornberger was the biggest human vote-getter in all three of the Super Tuesday primaries that have posted results so far.

In California, with 99.9 percent of precincts reporting, Hornberger led a field of 13 candidates with 17.5 percent of the vote. Tied for second with 11.6 percent were former military officer and Honolulu County Neighborhood Board member Ken Armstrong, and political satirist Vermin Supreme, the latter of whom previously won the New Hampshire primary. Lagging just behind at 11.4 percent was 1996 L.P. vice presidential nominee and academic Jo Jorgensen.

In Massachusetts, with 100 percent reporting (though the results are still unofficial), Hornberger was the leading vote-getting candidate with 12.6 percent, though he trailed that perennial L.P. favorite "None of the Above" (NOTA), which clocked in at 20 percent. Educator and controversialist Arvin Vohra was next at 6.3 percent, followed by a 5.9 percent tie between Vermin Supreme and Dan "Taxation Is Theft" Behrman. Write-ins, which have not yet been broken down, amounted to a combined 26.3 percent.

And in North Carolina, as Elizabeth Nolan Brown reported this morning, Hornberger again paced the biped field with 8.7 percent, though NOTA stomped with 29.8 percent. (NOTA wasn't on the ballot in California.) Just behind Hornberger with 8.2 percent was antivirus pioneer and international man of mystery John McAfee, who promptly dropped out, threw his support behind Vermin Supreme, and announced his candidacy for vice president:

I regret
That I am ending my campaign for President.

I am instead
Attempting to run
For the Vice Presidential slot.

And offer to be his VP pick.