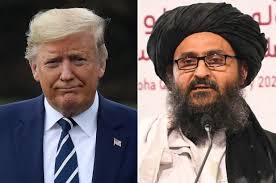 President Trump last week spoke on the phone with Taliban leaders who are on America's secret 'kill or capture' list, it has been reported.

National security officials are said to be concerned over what they said is an unprecedented breach of protocol by the president, who was chatting with individuals wanted by his own Defense Department.

'It's ground-shaking that the president spoke to individuals on a target list,' a senior Pentagon official told The Daily Beast.

'It was a big give from our side, towards an adversary that traditionally has never held up their side of the bargain in numerous other attempts towards de-escalation and peace.

'We made a group that lacks absolute operational control over their forces a legitimate player on the world stage.'

According to officials, Trump spoke on the phone with Mullah Abdul Ghani Baradar.

Baradar, who was once held prisoner in Pakistan, is a co-founder of the Taliban and the head of its political bureau in Qatar.