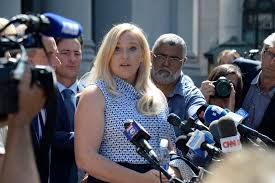 The American woman who claims she was trafficked to Prince Andrew is set to appear in a new Netflix documentary revealing harrowing new details about her life  as Jeffrey Epstein's alleged sex slave.

Virginia Roberts, 36, confirmed the news Friday in a post on Twitter, revealing that she would appear in the series alongside several of Epstein's other alleged victims.

'The Netflix team were wonderful to me & my husband. They're looking to tell the world the truth of what went on behind closed doors,' she wrote.

Netflix revealed on Twitter that the series would be titled 'Jeffrey Epstein: Filthy Rich' and would be made available to their 170 million customers later in the year.

According to a synopsis, the series 'exposes a horrifying story of relentless manipulation and sex trafficking. Epstein's survivors serve as the series' pre-eminent voices, providing powerful testimonials about their experiences, and inspiration in their resilience.'