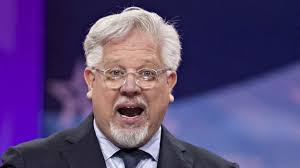 Former Fox host and conservative commentator Glenn Beck has joined a host of right-wing voices criticizing the shutdown amid the coronavirus pandemic claiming he 'would rather die' than see the economy collapse because businesses are closed.

Beck, 56, told listeners on his radio show Tuesday that people over 50 should head back to work and run the risk of falling ill with the deadly coronavirus to keep the economy going, acknowledging that this could result in their deaths.

His comments came after President Donald Trump spoke of an accelerated time frame for the shutdown, going against expert advice to open up the country again by mid-April with claims it would protect the economy.

On Monday, Texas lieutenant governor Dan Patrick also suggested that older people should go back to work and 'take a chance on your survival' for their 'children and grandchildren'.

Beck told listeners of his radio show that President Trump should cut back on the social distancing protocols before any more harm is inflicted on the economy.

'In Italy they're saying if you're sick and you're 60, don't even come in. So I'm in the danger zone.

'I would rather have my children stay home and all of us who are over 50 go in and keep this economy going and working,' Beck added.