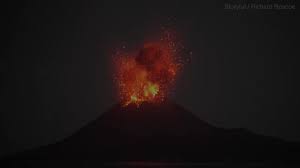 The infamous Krakatoa volcano has erupted off the coast of Indonesia, spewing plumes of ash 500m into the air.

Two eruptions were recorded by the country's volcanology centre on Friday night between 9.58pm and 10.35pm local time, and have continued into today.

A webcam image taken from Anak Krakatau Island, which is in the Sunda Strait, shows lava flowing from the volcano.

The Center for Volcanology and Geological Disaster Mitigation's (PVMBG) magma volcanic activity report said that the first eruption lasted one minute and 12 seconds starting at 9:58 p.m., when it spewed out ash and smoke 200 meters high.

The volcanology center reported a second eruption at 10:35 p.m. that lasted for 38 minutes and 4 seconds, spewing out a 500-meter-high column of ash that blew to the north.