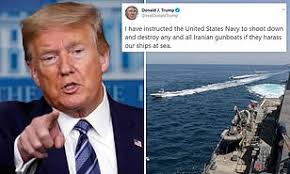 Update (1130ET): Everybody who was squawking about "World War III" four months ago is apparently too preoccupied with defending the dignity, wisdom and good name of Bill Gates to realize that the clouds of war are once again forming along the horizon, so to speak.

The Vice Chairman of the JCOS just told the press that a recent satellite launch out of Iran might as well have been a missile test in disguise. It demonstrated capabilities showing that Iran's capacity to threaten American allies (aka Israel and Saudi Arabia) in the region.

He denounced the launch as "another example of Iranian malign behavior."

That actually sounds...kind of concerning.

Update (0900ET): Nothing like the hint of war with Iran to rescue oil prices...

Trump using twitter to punch oil shorts in the nose and trigger a massive covering...there are few oil analysts more dangerous than the president.

Ever the showman, and a practiced master of distraction, President Trump has just lobbed another smokebomb at the MSM by tweeting that he has ordered Navy ships to fire on Iranian gunboats if they "harass" US ships.