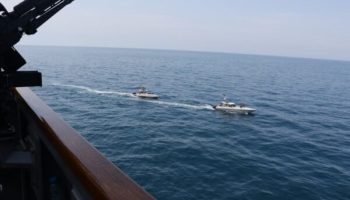 This includes the Pentagon bolstering its AC-130 gunships and Apache attack helicopters to target and destroy small surface threats in the Arabian Sea. Tehran has meanwhile responded with its own threats to 'destroy' American vessels of course.

It was apparently this beefed up presence that led to the April 15 confrontation about which Trump was responding by ordering destruction of boats that "harass" American vessels.

Bloomberg explains that while the Pentagon has been closely monitoring Iran's growing fleet of over 1,000 small boats in the gulf and Hormuz Strait, the US has in turn been provocatively beefing up its own presence. March and April US Navy exercises didn't go unnoticed by Iran, however:

The live-fire gunship exercises began in March as a first-time effort at coordination between Navy patrol coastal ships, the service's P-8A Poseidon reconnaissance aircraft and the Air Force's special operations AC-130 gunships, which are capable of nighttime attacks. Armed with a 30mm Gatling gun and precision-guided munitions, the famed gunships have been used to attack ground targets — but not naval targets — from Vietnam to Grenada, Panama, Bosnia, Iraq and Afghanistan.