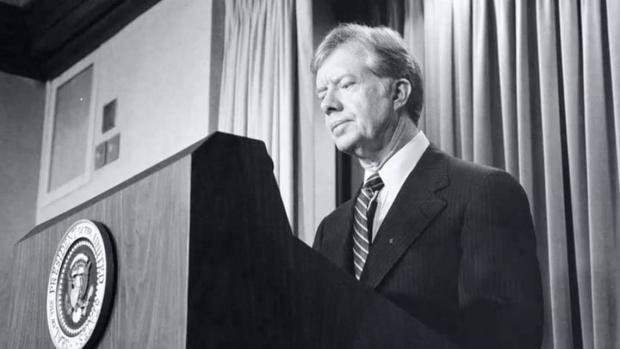 Writing in Foreign Policy, three distinguished members of the foreign policy establishment—Hal Brands of Johns Hopkins, Steven Cook of the Council on Foreign Relations, and Ken Pollack of the American Enterprise Institute—have issued a warning: Don't look now, but President Trump appears intent on repudiating the Carter Doctrine. If he does, all the great successes achieved by U.S. policy in the Persian Gulf over the past several decades will be lost. This, they want you to believe, would be a terrible thing.

You won't hear any of that from the triumvirate of Brands, Cook, and Pollack. Theirs is a good news story —at least until Trump started screwing things up. Acting in accordance with the Carter Doctrine, they write, "the United States established and upheld the basic rules of conduct in the region." Making that claim with a straight face requires ignoring a) U.S. support for Saddam Hussein during Iraq's war of aggression against Iran, which began the very year of the Carter Doctrine's promulgation; b) the vicious U.S. sanctions imposed on Iraq throughout the 1990s, punishing not Saddam, but the Iraqi people, c) the Axis of Evil cynically devised to create a fictitious rationale for attacking nations without any involvement in 9/11, d) the flagrantly illegal and reckless U.S. invasion of Iraq dating from 2003; e) the rise of ISIS and various Al Qaeda offshoots as a direct consequence of that failed war; and f) the embrace of assassination as an instrument of statecraft.