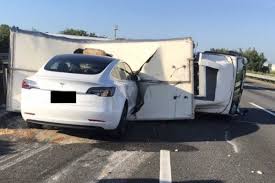 These videos capture the moment when a Tesla Model 3, presumably on Autopilot, slams into an overturned, stopped semi-truck on the highway. Autopilot reportedly didn't see the big, overturned, stationary object. Automatic emergency braking failed to respond in this scenario too. Fortunately, nobody was injured.

According to preliminary investigations by the Highway Police Bureau, the 53-year-old Tesla driver, Mr Huang, said that his car was on autopilot, and traveling at around 110 kilometers per hour at the time of the crash.

As soon as he saw the truck, he stepped on the brake, Mr Huang said. However, it was too late to stop the vehicle, and it crashed through the roof of the overturned truck.

This isn't the first time a Tesla failed to stop itself when a stationary vehicle was directly in front of it and it seems the Autopilot system has some issues in detecting stationary objects. Clearly, the car should've stopped itself here and you'd think this scenario would be among the easiest for a system such as Autopilot or automatic emergency braking to detect and respond to, but that's definitely not the case.