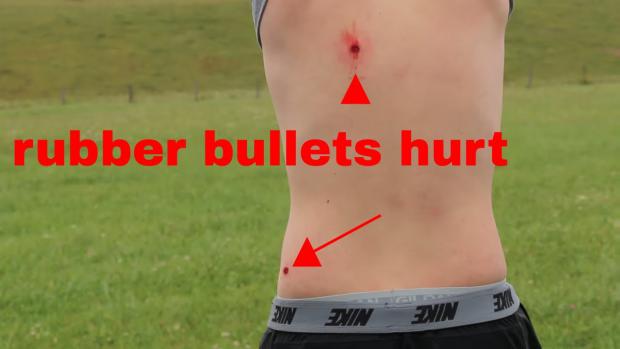 As protests have taken over the U.S., police officers in Minneapolis, Los Angeles, Sacramento, Kansas City, Chicago, and more have opened fire on crowds—bruising, maiming, and even permanently blinding peaceful demonstrators and members of the press. The shots fired have primarily been with what are colloquially called rubber bullets.

The name is a bit of a misnomer. These kinetic energy (KE) rounds are rarely made of rubber these days, and some even have metal components, just like conventional bullets. Most are actually shot from grenade launchers, though shotgun rounds are also popular, and rounds are even made for rifles and pistols. Instead of piercing the skin, the rounds are meant to strike someone with blunt force, incapacitating them like the swing of a baton but from afar.

More than a century in the making, rubber bullets can cause serious injury, and even kill, and it's taken time for the semantics to catch up. Once called nonlethal weapons, research has demonstrated their dangers, like that up to 15% of people struck with KE rounds are left with a permanent disability. They were renamed "less-than-lethal" for a while in the early aughts, and now much of the world, including the UN, calls them by a more suitable title: "less lethal" rounds.

"Very few still use the term 'nonlethal.' Nonlethal is a particularly American thing, I guess," says a ballistics researcher from the U.K. speaking under the condition of anonymity. "And it's stuck in U.S. law enforcement, perhaps because they like the way it sounds."

The very fact that they have to be used suggest the demonstrators are less than peaceful or failing to follow the lawful orders of the police and city officials involved. An example would be curfews once told they either should obey the orders or suffer the consequences. If they feel the law is unlawful fight it in courts or demand a vote to remove said law/ rule or even the elected officials responceable. Also turning a blind eye to the looters/ arsonists makes them no better than them.