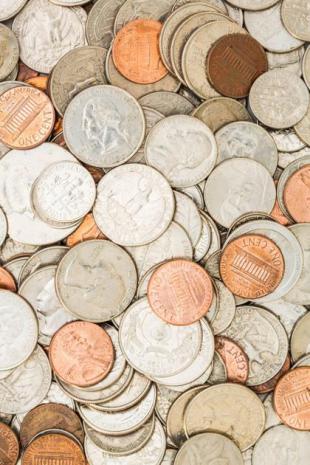 Having closed the US Mint and halted production (blaming COVID-19)  after a surge in demand for gold and silver coins, and warned of the danger of using bills (once again blaming the pandemic and choosing to "quarantine" cash for the sake of Americans' health), Fed Chair Powell quietly admitted to lawmakers this week that The Fed will be rationing coins as the circulation of coins across the US economy ground to a halt due to the pandemic.

"What's happened is that with the partial closure of the economy, the flow of coins through the economy ... it's kind of stopped," Powell told lawmakers.

He said the shortage was due to the mass business closures that prevented people from spending their coins, as well as a lack of places that are open where people can trade coins for paper bills.

Of course, Powell added that the problem would only be temporary, given the economy was reopening and establishments that traditionally deposit their cash into banks were beginning to restart operations.

Until the shortage is resolved, the Fed is taking the unusual step of limiting the amount of quarters, dimes, nickels, and pennies sent to banks "to ensure a fair and equitable distribution of coin inventory." They issued a statement explaining the decision:

The Federal Reserve is working on several fronts to mitigate the effects of low coin inventories. This includes managing the allocation of existing Fed inventories, working with the Mint, as issuing authority, to minimize coin supply constraints and maximize coin production capacity, and encouraging depository institutions to order only the coin they need to meet near?term customer demand. Depository institutions also can help replenish inventories by removing barriers to consumer deposits of loose and rolled coins. Although the Federal Reserve is confident that the coin inventory issues will resolve once the economy opens more broadly and the coin supply chain returns to normal circulation patterns, we recognize that these measures alone will not be enough to resolve near?term issues.

Consequently, effective Monday, June 15, Reserve Banks and Federal Reserve coin distribution locations began allocating coin inventories. To ensure a fair and equitable distribution of existing coin inventory to all depository institutions, effective June 15, the Federal Reserve Banks and their coin distribution locations began to allocate available supplies of pennies, nickels, dimes, and quarters to depository institutions as a temporary measure. The temporary coin allocation methodology is based on historical order volume by coin denomination and depository institution endpoint, and current U.S. Mint production levels. Order limits are unique by coin denomination and are the same across all Federal Reserve coin distribution locations. Limits will be reviewed and potentially revised based on national receipt levels, inventories, and Mint production.