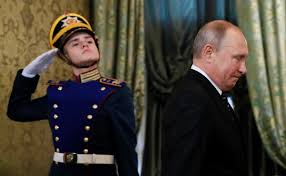 A majority of voters approved changes to Russia's constitution that would allow President Vladimir Putin to hold power until 2036, but the weeklong plebiscite that ended Wednesday was tarnished by widespread reports of pressure on voters and other irregularities.

With most of the nation's polls closed and 20% of precincts counted, 72% voted for the constitutional amendments, according to election officials.

67-year old Russian President Vladimir Putin will have already been in power for over two decades when his current term runs out in 2024, but now as Russia is in the midst of a crucial vote on a significantly revised constitution, his rule theoretically could extend further all the way up to 2036, or a whopping 12 more years.

Bloomberg reports after voting began last week, despite raging coronavirus fears, that the latest exit poll by state-run Vtsiom puts support for the amendments, which includes the term limit exemption, at 76%.

Media Operates Like ELECTION COMMISSIONS, They Can Tell Us Whatever They THINK Will Happen