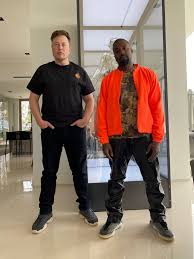 Tesla CEO and Kanye's friend, Elon Musk, quickly offered up his "full support" to the 43-year-old.

The father of four, who's married to reality star Kim Kardashian, told fans he's got "2020 vision" and has his sights set on the country's highest political position.

Kanye tweeted: "We must now realize the promise of America by trusting God, unifying our vision and building our future.

This comes just days after Kanye posted a photo of himself and Elon hanging out at home together, captioning the shot: "When you go to your boys house and you're both wearing orange."

Kanye's wife Kim later added his tweet to her Instagram Stories and also retweeted him while adding an American flag emoji.