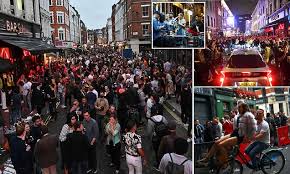 Two bullet-ridden bodies lay sprawled on bloodstained concrete steps. Alongside, relatives of the victims are wailing and collapse to the ground. In another part of the city, a gang of youths use spray paint to disable security cameras before robbing a corner store. Later, video footage captures police officers sitting helplessly in their patrol car as a baying crowd hurls glass bottles at them.

This is lawless New York – a city that was once America's glittering crown jewel but which risks descending into mob rule.

Murder figures have skyrocketed and a combination of the coronavirus pandemic, Black Lives Matter (BLM) protests and weak political leadership is in danger of achieving what Osama Bin Laden never could: bringing the Big Apple to its knees.