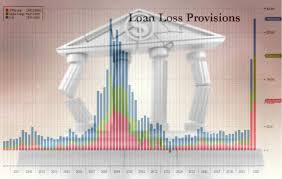 , an accounting gimmick if there ever was one, which would end up boosting the bottom line thanks to a few "kitchen sink" quarters in the aftermath of the Lehman bankruptcy. The thinking here went that having suffered massive losses during the financial crisis, when all banks suffered crushing losses so they would then get bailed out, these same banks would then "recoup" billions in losses over time that would be run through the income statement as a reversal of accrued loss provisions.

Well, after the longest expansion in history, this process has gone aggressively into reverse, and instead of releasing loan loss reserves the banks are now building them up again as the "biblical" wave of consumer and corporate defaults due to the US economic shutdown hits US banks.

We first made this observations exactly thee months ago when in "Houston: The Banks Have A Huge Problem" we said, and we quote...

... on average most banks - this time including the hedge fund known as Goldman Sachs which has since pivoted to becoming a subprime lender to the masses with "Marcus" - saw their loan loss provisions surge by roughly 4x from year ago levels, with JPMorgan's jumping the most, or just over 5x, hinting the other banks are likely underprovisioned for the storm that is coming.

Alas, these provisions amounts are nowhere near enough if history is any indication.