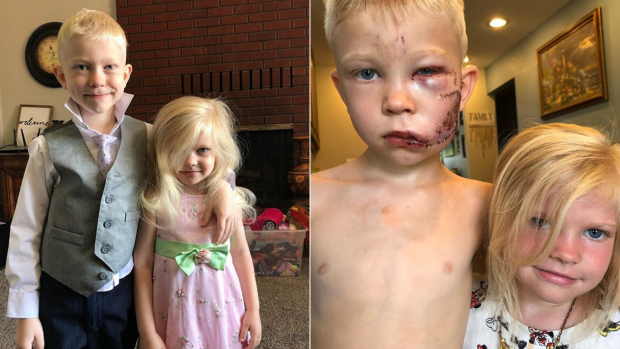 Hollywood stars Anne Hathaway and Mark Ruffalo have heaped praise on a 'hero' Wyoming boy who needed 90 stitches after he was mauled by a dog which had launched an attack on his younger sister.

Bridger Walker, from Cheyenne, was bitten several times on the head and face when he got between the dog and his sister after it started charging at her.

Despite having been attacked, he was able to grab his sister's hand and lead her away from danger, according to an Instagram post from his aunt Nicole Walker.

Ms Walker asked people to share the post as widely as possible so he could get some 'words of encouragement from his favorite heroes.'

Amazingly, Avengers star Ruffalo responded after Hathaway shared Bridger's story and said, 'I know a superhero when I see one.'

She initially wrote in an Instagram post: 'I'm not an Avenger, but I know a superhero when I see one,' she penned alongside a photo of him.

'I can only hope I'm half as brave in my life as you are in yours, Bridger.'

Ruffalo then responded to Ms Walker's post and wrote: 'Dear Bridger, I just read about what happened to you and I wanted to reach out to say this…