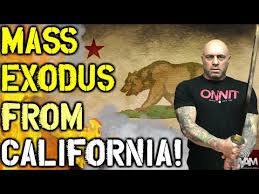 Josh Sigurdson talks with Tim Picciott, The Liberty Advisor about the massive exodus from California as big names like Elon Musk and Joe Rogan announce they're leaving.

Joe Rogan has considered the notion of leaving California for Texas for quite some time, but recently during a podcast he announced, "I'm outta here. I'm gonna go to Texas. I just want to go somewhere in the center of the country, somewhere it's easier to travel to both places, and somewhere where you have a little bit more freedom."

This sentiment is growing among millions of Californians as well as people in New York and New Jersey.

The California exodus has been happening for a long time. In fact, the majority of people in Nevada are originally from California. Arizona, Texas and Florida are other states seeing a huge influx of people from the heavy taxed states.

Tim explains how this could work out really well in Joe Rogan's favor, especially considering the massive payout he's getting for moving to Spotify.