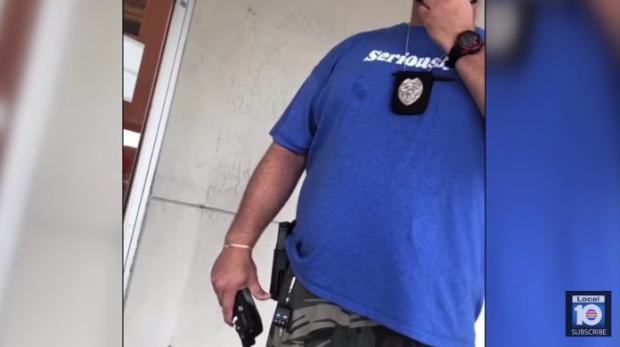 Armed government workers will do anything for money. Your money. They used to take it for "speeding." Now it's for sneezing.

And not even that.

Here's video out of Florida of an undercover AGW relieving a victim of $110 for the "crime" of not wearing a Face Diaper . . . momentarily.

There is a Gesundheitsfuhrer Order in North Miami that all persons must wear one, all the time – no matter how healthy they are and regardless of the threat to their health, both physical and psychological. The Diaper Decree  is being enforced by undercover AGWs such as the one in the video below – who failed to ticket himself after he, too, partially removed his Diaper.

He also smeared his beefy paws all over the disgusting thing, slathering it with his schnott and whatnot, which was then applied to the extortion note forced upon the victim, who was told he'd be arrested – that is, manacled and taken to a cage – if he failed to sign the extortion note.

It is interesting to note that the AGW is morbidly obese and thus the greatest threat to his health isn't the virus but his own bloatedness and the increased risk of diabetes and heart disease – far greater than the risk of a sneeze.

Lots of "cases" – very little chance of death or even symptoms for most people. Hence the nonstop shrieking out of the idiot box – out of everywhere – about the cases! the cases!

The victim ought to just have run away as this AGW would have had a stroke, probably, attempting to keep up. But given the times, that could have triggered – literally – summary execution.