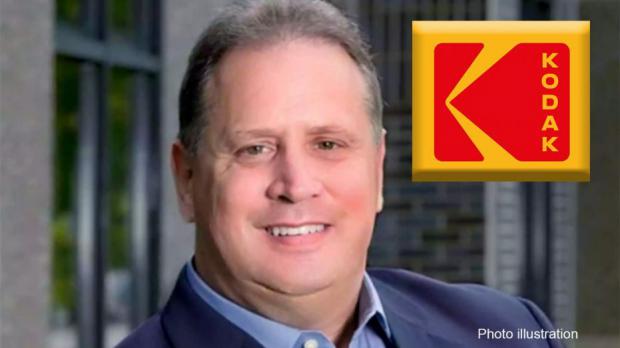 The CEO of Kodak had admitted talks to turn the fallen photo giant into a pharma company began a month before he bought thousands of shares.

Jim Continenza, who only took over as de facto CEO last year, told CNBC Wednesday the initial discussions started in May. On June 23 he bought 46,737 shares for just $2.22. His profit for the June purchase alone stands at almost $1.6 million. Board member Philippe Katz also purchased 5,000 shares that same day.

The U.S. International Development Finance Corp said on Tuesday it would sign a letter of interest to provide Kodak a $765 million loan from the U.S. government to produce pharmaceutical ingredients.

When asked about Continenza's June purchase Kodak said it was 'a continuation of ongoing, regular investments in Kodak and are in full compliance with regulatory guidelines for investment activity.'  The Securities and Exchange Commission declined to comment when approached by the DailyMail.com Thursday.

Continenza's June 23 $103,575 investment is now worth around $1.5 million. Experts have noted he has regularly bought shares of Kodak since August 2019.

According to SEC regulations, public company insiders can buy and sell stock at predetermined times and prices to prevent insider trading. DailyMail.com has contacted Kodak for additional comment.