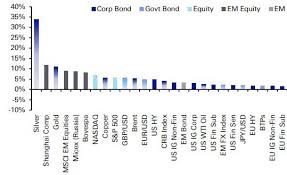 When looking at the torrid market performance in July, Deutsche Bank's Jim Reid notes that silver (+35%) had its best month since December 1979 while the dollar the worst for a decade. US equities had a good month in spite of rising virus caseloads due to a strong earnings season relative to expectations, especially in tech towards the end of the month. YTD Silver, Gold and the NASDAQ have been the three best performers while at the bottom of the leaderboard Brent, WTI and European Banks are all down at least 30%.

While July proved to be another decent month for risk assets, it was the performance of two other assets in particular which caught the eye. The first was Silver, which had its strongest month since December 1979. The second was the weakness in the USD, which ended with the USD spot index dropping by the most in a single month since September 2010.

Indeed the impact of the latter was fully felt when looking at returns in USD terms, with 36 of the 38 assets in DB's sample finishing with a positive total return. I