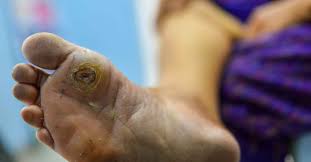 Bacteriophages (or just phages) are viruses that prey on bacteria, and now scientists have used them to treat Golden Staph infections in diabetic foot ulcers.

Bacteria are a long-time antagonist of ours, although since the invention of antibiotics we might have become a bit too complacent. Now, the critters are fast developing resistance to our best drugs, and if this continues even the most basic infections could become life-threatening once again.

New antibiotics are always in development, but to make sure we keep the upper hand long-term, brand new strategies will be needed too. And phage therapy might be one of them.

Among the most abundant lifeforms on the planet, phages are tiny viruses that infect and replicate inside bacteria. Already, they're proving promising in fighting bacterial infections, taking the forms of inhalable treatments for pneumonia, wrapping materials that kill foodborne bugs or, failing that, drinkable chasers to clear up food poisoning symptoms.

For the new study, researchers from Flinders University in Australia used phages to target bacteria that may infect diabetic foot ulcers. These wounds can affect a large number of people with diabetes, and if infected and left untreated, can result in amputation or even death.