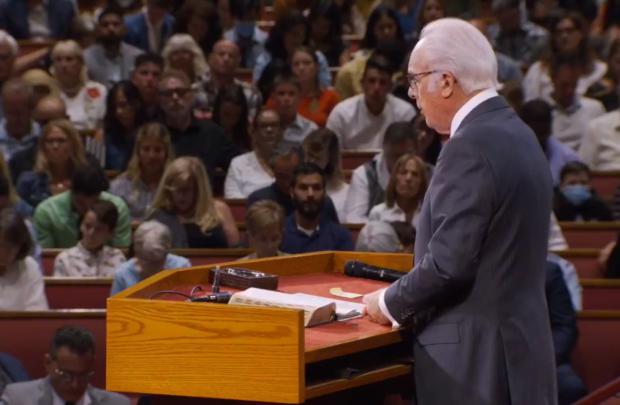 (RNS) — A suburban Los Angeles megachurch has filed a lawsuit to continue holding indoor services in person after California issued a second lockdown order to slow the spread of the coronavirus.

Pastor John MacArthur and Grace Community Church in Sun Valley have accused state officials of violating the California Constitution by "unequally" restricting their free exercise of religion during the pandemic while allowing large racial justice protests to go unchecked.

The church initially complied with state restrictions but reopened its doors to several thousand worshippers in late July. Church leaders say that meeting and singing hymns together in person are commanded in the Bible.

For weeks, MacArthur — a prominent evangelical figure — has defied the state's health orders by opening the doors of his church, allowing several thousand congregants to sing together.

Video streams of services show packed rows of worshippers with little to no social distancing or masks in use.

"It is time for California to recognize that disfavored religious minorities are not second-class citizens," states the lawsuit, filed Wednesday (Aug. 12) in the Superior Court of the State of California County of Los Angeles. "It is time for California to explain how it can justify banning worship to prevent the spread of a disease (with an overall mortality rate of 0.02%) while it is fine for protestors to spread that disease like wildfire."

A Los Angeles County order issued July 29 limits indoor gatherings at houses of worship to 100 people or 25% of the building's capacity, whichever is lower. Singing has also been banned for indoor services; health officials say chanting and singing "negate the risk-reduction achieved" through social distancing measures.

Los Angeles County attorneys have also sent a cease and desist letter to the megachurch threatening arrest or a daily fine of $1,000.

Constitutional law experts say the Supreme Court has recognized that the right to gather and worship can be suspended broadly for public health reasons. Restricting religious practices, not beliefs, during a pandemic is legal.

" ... California's edicts demanding an indefinite shutdown have gone now far past rational or reasonable and are firmly in the territory of tyranny and discrimination," said Jenna Ellis of the Thomas More Society, a conservative law firm that is representing church leaders. "This isn't about health. It's about blatantly targeting churches."