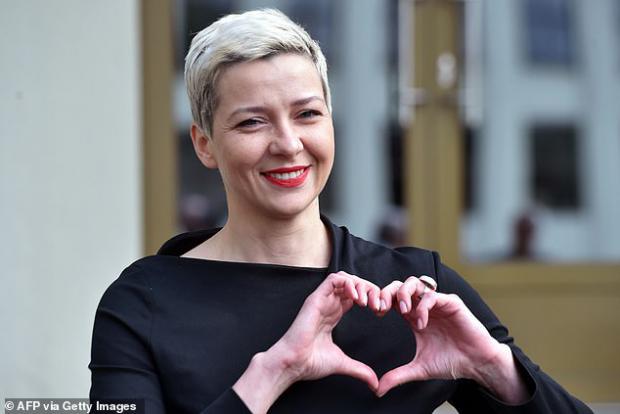 Belarus opposition leader Maria Kolesnikova was today bundled into a minibus by masked men in Minsk.

The 38-year-old was 'kidnapped by unknown people' and driven off in a vehicle marked 'Communications', her campaign team said. Kolesnikova's team said her phone has been turned off and there was no comment from Minsk police.

Kolesnikova is the only member of the three women who have joined forces to fight against President Alexander Lukashenko's dubious August 9 election to have remained in the country.

It comes as Lukashenko prepares to fly to Moscow for talks 'in the coming days,' the Kremlin said on Monday.

The old Soviet overlords are able to offer counsel on stamping out rebellion and themselves stand accused by the EU of poisoning thorny opposition leader Alexei Navalny last month.

Belarusian authorities yesterday cracked down heavily on protesters, bundling them into vans and beating them with batons, as 100,000 defied Lukashenko with another rally in the capital.