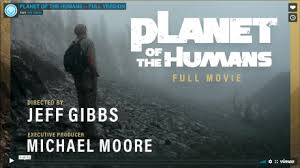 Apoplexy is the order of the day among 'green' energy zealots following the release of Mike Moore's 'Planet of The Humans'.

In the military they call it "blue on blue", although when the hard left are pulling the trigger it's more aptly described as "green on green".

But the documentary backed by Moore isn't so much 'friendly fire', as an all-out assault on the billionaire hypocrites who whipped up fear and frenzy over changes in the weather and then, as if by magic, produced the notional 'solution' to the calamity in the form of heavily subsidised wind, solar and biomass. A ''solution' which, of course, they all heavily invested in.

The film – produced by Moore and made by Jeff Gibbs – has been uploaded to YouTube to allow all and sundry to get the message: renewable energy is the greatest economic and environmental fraud of all time.

Funny, sounds a little bit like the message that we've been thumping home since December 2012.

Moore made his mark in documentary film making by attacking all manner of capitalist endeavours, including the American small arms industry (Bowling for Columbine), its healthcare industry (Sicko) and the entire capitalist system itself (Capitalism: A Love Story).

How the Left and Right Fight