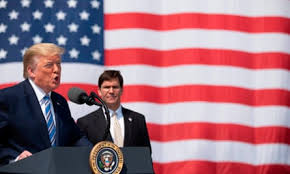 What's actually uncomfortable for many of those commentators, however, is the degree to which the president is speaking the truth.

Many of the senior leaders at the Pentagon are captured by the defense industry. And the fear that challenging defense contractors while in government jeopardizes future high-paying jobs in that industry has the potential to corrupt decision making at the Pentagon. As one Air Force memo put it, "If a colonel or a general stands up and makes a fuss about high cost and poor quality no nice man will come to see him when he retires."

And we should not be lashing out at those who call this out; we should be holding their feet to the fire and pushing them to actually do something about it.

I track the undue influence of defense contractors on the Department of Defense, and found in 2018 that over 380 senior Pentagon officials were hired by defense contractors within two years of leaving the building. And in the vast majority of cases, I found the top 20 defense department contractors were hiring former government officials to be registered lobbyists, where the primary skill is influence-peddling.

The president understands how this works. "I think anybody that gives out these big contracts should never ever, during their lifetime, be allowed to work for a defense company, for a company that makes that product," he said shortly after he was elected. Unfortunately, the ethics executive order he issued as president fell significantly short of that promise.