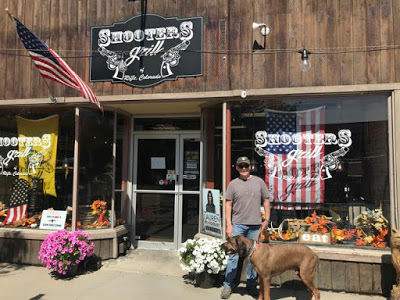 I've been traveling thru the west with my dog, and last Friday we stopped at Shooter's Grill in Rifle, CO.  I'm sure you've heard of Lauren Boebert who owns Shooters and is running for congress.  She beat the republican incumbent in the primary and now faces a left wing professor in the general.  I stopped in her headquarters (next door to her restaurant), and spoke with one of her relatives for about half an hour.  Good people; sincere, homeschool their kids, close to their families, deeply patriotic, very hard working.  I pointed them to my economics course for their middle-schoolers.

Lauren is someone we should have in our camp.  She never went to college and was largely apolitical but then started reading the constitution and couldn't stop.  She's had a couple of minor scrapes with the law; she objected to a cop being too aggressive with someone else, and had some tax disputes with the local gov't (great credentials!).  She's animated primarily by the 2nd amendment and from there has adopted much of Trump's positions on strong military, free and 'fair' trade, strong borders, etc.  Get this, though: her campaign posters just have her name and the word Freedom (you can see one in the pic babove).

She's young enough and new enough to the ideas of liberty that she can learn and seems to have strong libertarian instincts, though I suspect she doesn't yet have a strong theoretical foundation.  She could be on the national stage for a long time.  And I think she has a good chance of winning, both on Trumps coattails and her own hard work (not to mention her opponent comes off as an even older, less attractive, and less charismatic Elizabeth Warren!).