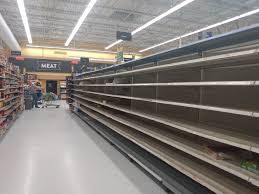 Authored by Michael Snyder via The End of The American Dream blog,

The head of the UN World Food Program repeatedly warned us that we would soon be facing "famines of biblical proportions", and his predictions are now starting to become a reality.  We have already seen food riots in some parts of Africa, and it isn't too much of a surprise that certain portions of Asia are really hurting right now.  But I have to admit that I was kind of shocked when I came across an article about the "hunger crisis" that has erupted in Latin America.  According to Bloomberg, "a resurgence of poverty is bringing a vicious wave of hunger in a region that was supposed to have mostly eradicated that kind of malnutrition decades ago".

We are being told that food shortages are becoming acute from Mexico City all the way down to the southern tip of South America, and those that are the poorest are being hit the hardest.

Let me ask you a question.

What would you do if you didn't have any food to feed your family?

Fortunately, for the vast majority of my readers that is just a hypothetical question.  But for many families in Latin America, the unthinkable is now actually happening…

He couldn't feed his family. Matilde Alonso knew it was true but couldn't believe it. The pandemic had just hit Guatemala in full force and Alonso, a 34-year-old construction worker, was suddenly jobless.

He sat up all alone till late that night, his mind racing, and fought back tears. He had six mouths to feed, no income and no hope of receiving anything beyond the most meager of crisis-support checks — some $130 — from the cash-strapped government.