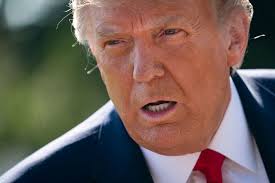 WASHINGTON (AP) — President Donald Trump on Tuesday called an abrupt end to negotiations with Democrats over additional COVID-19 relief, delaying action until after the election despite ominous warnings from his own Federal Reserve chairman about the deteriorating conditions in the economy.

Trump tweeted that House Speaker Nancy Pelosi was "not negotiating in good faith" and said he's asked Senate Majority Leader Mitch McConnell to direct all his focus before the election into confirming his U.S. Supreme Court nominee, Amy Coney Barrett.

"I have instructed my representatives to stop negotiating until after the election when, immediately after I win, we will pass a major Stimulus Bill that focuses on hardworking Americans and Small Business," Trump tweeted.

The unexpected turn could be a blow to Trump's reelection prospects and comes as his administration and campaign are in turmoil. Trump is quarantining in the White House with a case of COVID, and the latest batch of opinion polls shows him significantly behind former Vice President Joe Biden with the election four weeks away.

IMPACT ON THE ECONOMY:

– Stocks drop after Trump calls off talks on economic stimulus

The collapse means that Trump and down-ballot Republicans will face reelection without delivering aid to voters — such as a pre-election batch of $1,200 direct payments, or "Trump checks," to most individuals — even as the national jobless rate is about 8% with millions facing the threat of eviction. One endangered Republican, Maine Sen. Susan Collins, said "waiting until after the election to reach an agreement on the next Covid-19 relief package is a huge mistake."

"Make no mistake: if you are out of work, if your business is closed, if your child's school is shut down, if you are seeing layoffs in your community, Donald Trump decided today that none of that — none of it — matters to him," Biden said in a statement released by his campaign.

Trump's move came immediately after he spoke with the top GOP leaders in Congress, who had been warily watching talks between Treasury Secretary Steven Mnuchin and Pelosi. Many Senate Republicans had signaled they would not be willing to go along with any stimulus legislation that topped $1 trillion, and GOP aides had been privately dismissive of the prospects for a deal.