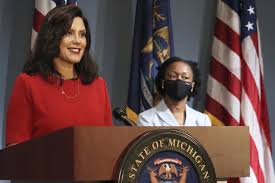 In addition to the six alleged militia members charged by the Feds earlier, another seven alleged members of the militia group, known as the "Wolverine Watchmen", were charged in the conspiracy and have all been taken into custody for purportedly trying to target law enforcement officials. That brings the total arrested to 13, according to the AP.

"The individuals in custody are suspected to have attempted to identify home addresses of law enforcement officers in order to target them, made threats of violence intended to instigate a civil war, and engaged in planning and training for an operation to attack the capitol building of Michigan, and to kidnap government officials, including the governor of Michigan," AG Nessel said.

The AG then explained that the charges are still subject to change once federal law enforcement officials review all the evidence collected during a raid of 24-year-old Ty Garbin's home in Hartland on Wednesday night.

On social media, leftists took things a step further, as they tried to connect the members of the Wolverine Watchmen to the Oklahoma City bombing carried out by alleged militia member Timothy McVeigh.