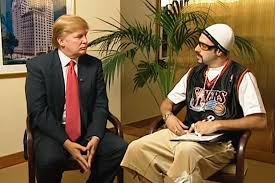 British left-wing activist Sacha Baron Cohen has resurfaced in the news this week, as the corporate media heavily shills his new film due to its focus on Donald Trump's lawyer Rudy Giuliani, who has come under fire for giving a story focused on Biden family scandals to the New York Post.

Cohen's signature interview style, in which he harasses people under a false identity in a bid to make them say something embarrassing or politically incorrect, has been praised for its effectiveness in putting everyday Americans and conservative political figures in an unflattering light.

One of Cohen's most rarely-mentioned interviews, however, is the one that should have been his most notorious: a sitdown in 2003 with Donald Trump, who went on to become the President of the United States as a Republican.

The interview did play out the way Cohen intended, as Trump easily saw through the activist's disguise and curtly ended the conversation, leaving Cohen visibly shaken.

After Trump answered Cohen's first ridiculous question of "when did businesses start," the self-described comedian tried to pitch a fake business idea to the real estate mogul.

Trump, who was already visibly annoyed with Cohen, curtly told the comedian to tell him the idea "very quickly."

After Cohen made his spiel, Trump said goodbye and stood up, ending the interview. The comedian's attempts to convince Trump to stay fell on deaf ears as the future President left the stage.

Trump later recalled the incident during a White House interview with Dave Portnoy of Barstool Sports in July.

"I don't know if you can remember this, you were once on the Ali G show, and you were the only one that sniffed out that it was a fake interview and the whole thing," Portnoy said.

Trump was surprised that Portnoy recalled the 2003 interview, which has not been heavily marketed presumably due to its failure to embarrass Trump.

The President added, "That's right, I said, 'What is going on with this guy?' And I just felt it was a phony deal. And he said he was some British Broadcasting Corporation, they called up with everything beautiful, the voice, 'this is British broadcasting,' and then this guy shows up."