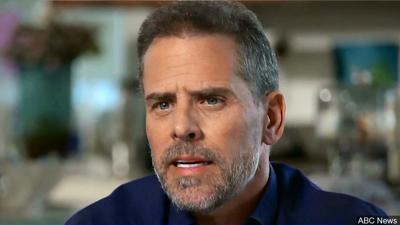 The undated photograph resurfaced in the wake of a New York Post report claiming that emails found on Hunter's laptop could purportedly implicate Joe in his embattled son's international business dealings during his time as vice president.

In the image - which was published on the website of an anti-corruption group called the Kazakhstani Initiative on Asset Recovery and has not been independently verified - Joe and Hunter are seen smiling alongside Rakishev and Kazakhstan's former prime minister Karim Mossimov.

DailyMail.com lifted the lid on Hunter's alleged relationship with Rakishev last week, revealing that between 2012 and 2014 the former VP's son worked as a sort of go-between helping the Kazak businessman broker US investments.

Emails passed to The Mail via anti-corruption campaigners from the Central Asian country revealed that Hunter held extensive meetings with Rakishev, who has close family ties to the kleptocratic regime of his homeland's despotic former president Nursultan Nazarbayev.

Hunter also traveled to the Kazakh capital of Astana to hold business discussions with Rakishev, who was apparently looking to invest a portion of his personal fortune in New York and Washington DC.

Hunter then attempted to persuade Rakishev to buy into a Nevadan mining company, brokering a series of meetings with the firm, before convincing him to invest a cool million dollars with Alexandra Forbes Kerry, the film-maker daughter of Democrat Senator and former Presidential candidate John Kerry.