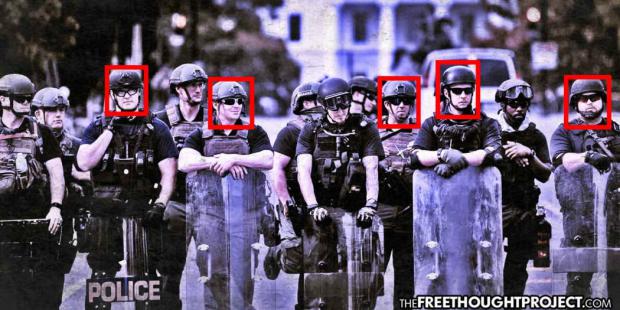 As TFTP reported during the George Floyd protests, across the country, in dozens of cities, cops were doling out unprecedented violence in the face of angry protests stemming from unchecked police brutality. Though Floyd's death was the flash point of the unrest, the uprising represented something far deeper — systemic abuse by law enforcement of minorities, the poor, and everyone else not directly connected to the establishment. Countless incidents throughout this unrest involved officers who could not be identified and as a result of their anonymous instigation and violence, there has been no accountability.

In multiple states, police have been seemingly taking measures to avoid this accountability by removing their name tags or covering their badges. This is in direct violation of most departments' policies. But no politicians, mayors, governors, or mainstream media seem to care.

Cops hiding their identification is ominous for two reasons. The first reason being that they can enact brutality against the innocent and we do not know who they are to hold them accountable. The second reason is the fact that anyone can dress up like a cop with no badge number and start doing whatever they want, up to and including inciting violence, detaining people, or any other numerous unscrupulous acts.