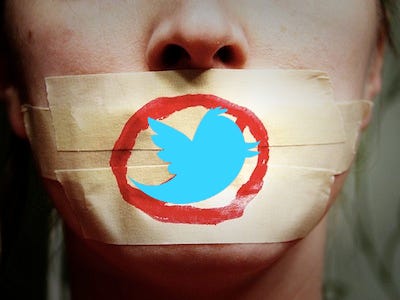 As if a complete and total coverup of the Hunter Biden story by the mainstream media and big tech wasn't far enough; and as if every social media product and app you use annoyingly reminding you to vote on November 3 wasn't enough, Twitter has now apparently gone "full Orwell" and, through a spokesperson, basically said they will prompt users with warnings on "topics that are likely to be the subject of election misinformation".

The news hit Bloomberg around 12:30pm EST on Monday:

TWITTER WILL BEGIN TO SHOW PROMPTS TO U.S. USERS THAT ADDRESS TOPICS THAT ARE LIKELY TO BE SUBJECT OF ELECTION MISINFORMATION - TWITTER SPOKESPERSON

What are "topics that are likely to be the subject of election misinformation", anyway? We're guessing it can include any literally anything that would be detrimental to Democratic nominee Joe Biden, while negative press and conspiracies about President Trump are allowed to run amok at will.

For example, we pointed out the recent hypocrisy of Twitter allowing Rudy Giuliani's alleged sexually explicit scene in the new Borat movie to run wild on Twitter, while video of a Presidential nominee's son allegedly smoking crack while engaging in sex acts with a woman was promptly pulled from the platform.

Around the same time, Twitter Support put up a Tweet calling the 2020 election "unlike any other in US history" and informing users it is going to prompt them about potentially delayed election results and voting by mail.

The photo shows pictures of Twitter warning its users: "You might encounter misleading information about voting by mail" and "Election results might be delayed". Both "warnings" seem suited to prepare the public for an onslaught of mail in voting (likely to favor Democrats) and a potential contested election (as a result of mail in voting that would likely favor Democrats).