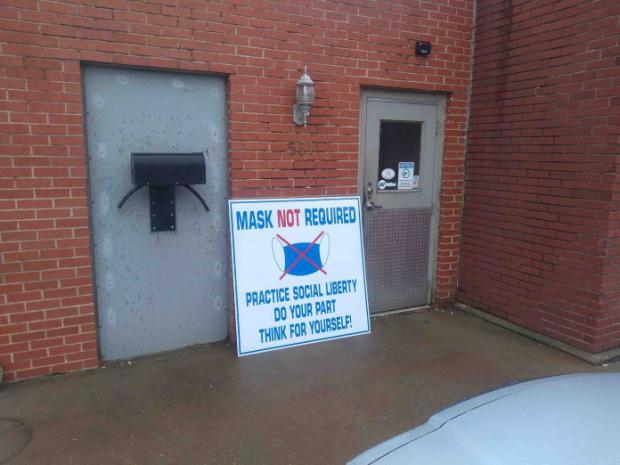 A reader who owns a business sent in the picture accompanying this story. It says "Masks Not Required" – and recommends that patrons Practice Social Liberty and Do Their Part by Think(ing) for Themselves.

This is a refreshing sign that dissent – which is the essential attribute of freedom – still has some defenders and that not everyone has been driven over the cliff of mass hysteria into mindless conformity by the constant ululation of every imagined worst case scenario that never actually came to pass but which the ululators seem to wish would come to pass.

It's very interesting – very telling – that any piece of good news isn't news.

When the bodies didn't stack up in the millions, as we were assured they would, you didn't hear a mea culpa. You didn't hear – thank god, we were wrong! This isn't as bad as we initially thought!

Instead, we began to hear – endlessly – about  the cases! the cases! – and still do. Without a peep about context – i.e., what is the ratio of positive "cases" to seriously sick patients – and to dead ones.

Because that would be good news.

Nothing about the fact that very few – almost no – people who aren't very elderly and chronically sick, as with COPD or advanced cardiovascular disease – have much to fear from the WuFlu, which is 0.00-something likely to kill them.