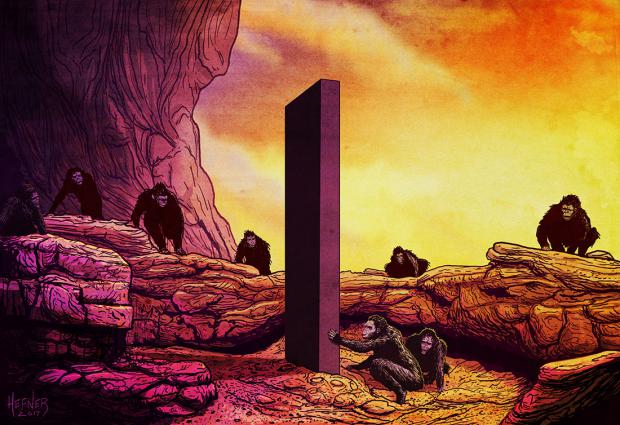 Government workers had a close encounter of the strange kind out in the Utah desert.

A crew with the state wildlife resources department was aboard a Utah Department of Public Safety helicopter when they spotted a mysterious monolith sticking out of the dirt last week.

About 10 to 12 feet tall, the shiny metal object was firmly planted in the ground, suggesting it wasn't just dropped from above.

Officials suggest it could be have been constructed by an artist or a huge fan of 2001: Space Odyssey - the structure resembles the machines found in Arthur C. Clarke's story.

The unlabeled object is located inside a red rock cove but, fearful amateurs could endanger themselves trying to get a closer look, the workers have withheld details about its exact location.

The team was in the remote area to count bighorn sheep when they spotted the unidentified object.

'One of the biologists is the one who spotted it and we just happened to fly directly over the top of it,' pilot Bret Hutchings told KSL-TV. 'He was like, 'Whoa, whoa, whoa, turn around, turn around!' And I was like, 'what.' And he's like, 'There's this thing back there – we've got to go look at it!'