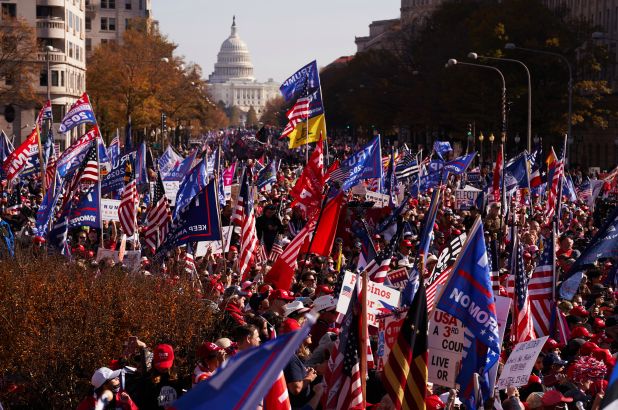 It is a movement based on love for God, liberty and humanity. The atmosphere was palpably infused with an overlay of the spiritual battle between good and evil which transcends politics as an estimated one million individuals peacefully assembled at the Million MAGA March and rallies in Washington, D.C. This account is based on my observations, discussions with others, and reading articles and watching videos of the event. The protesters, mostly Americans, were joined by freedom lovers who flew to the U.S. from Japan, Poland, Germany and other countries. All participants exercised the right of free speech, the right to peaceably assemble and to petition the government for a redress of grievances as guaranteed in the First Amendment.

The rally/march was planned in less than a week and was a spectacular success no thanks to censorship by social media, an attempt by the Republican Establishment to hijack the event, and smears by the fake news media. Facebook took down the page promoting the event. Eventbrite did the same, falsely claiming the march had been cancelled. Mailchimp refused email delivery service to rally organizers. The fake news media predictably attempted to discredit the event in advance by falsely claiming white supremacists and far-right radicals were behind it and that a disappointing turnout of a few thousand was expected. I believe the actual turnout was closer to a million based on my own observation and that of others; the opinion of several organizers; and aerial shots. One organizer said he had hired a faction of the D.C. police for security and one veteran member of the force who had provided security at the 1995 Louis Farrakhan Million Man March ascertained the MillionMAGAMarch crowd was larger. The attendance may be attributed to the fact that, rather than the rally being centrally controlled, a coalition of individuals and groups had informed their audiences of the upcoming event.