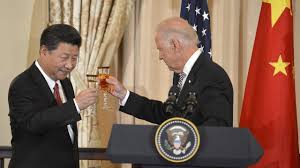 Though most world leaders had issued formal messages in the days following the AP calling the ultra-tight race which unusually wasn't called until the Saturday following Nov.4, this is the first acknowledgement Xi has given to Biden's win.

Xinhua wrote of Xi's message that the PRC leader "pointed out that promoting the healthy and stable development of China-US relations not only conforms to the fundamental interests of the two peoples, but also is the common expectation of the international community."

And further according to the state media paraphrase:

"It is hoped that both sides will uphold the spirit of non-conflict, non-confrontation, mutual respect, and win-win cooperation, focus on cooperation, manage differences, promote the healthy and stable development of Sino-US relations, and work with other countries and the international community to advance the noble cause of world peace and development."

China's foreign ministry had initially issued a tentative congratulations to Biden on Nov.13, but Xi remained among a handful of world leaders that included the heads of Brazil, Mexico, and Russia to hold out issuing a formal acknowledgment of the results.