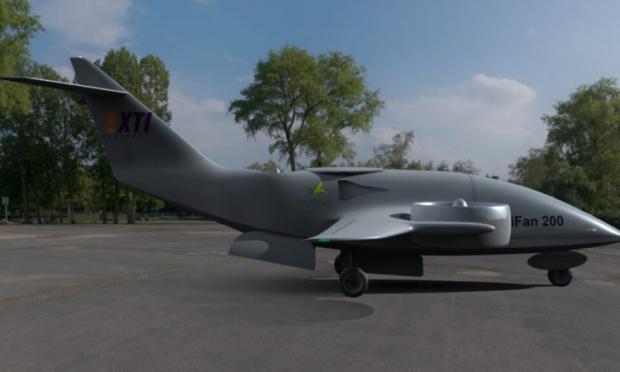 Partnering with Verdego Aero, XTI says it'll be able to build in a 180 kW generator running on Jet-A to feed the TriFan's high-power battery pack, giving it the ability to carry a 500 lb (227 kg) payload over a distance of 230 miles (370 km). While no max cruise speed is listed for the cargo plane, XTI says the TriFan 600 six-seater is rated for 345 mph (555 km/h), or about twice the speed of a conventional helicopter.

One advantage of this design is its ability to save energy by taking off and landing on a runway where there's one available, or switching to VTOL to land in a field, on a yacht or a helipad where the mission calls for it.

Disadvantages would include the fact that although it's cleaner and more efficient than a turbine powertrain by some 35 percent, it's still not a zero-emissions electric. And the fact that the airframe runs only three fans, which not only severely compromises its control authority in a hover – it also means there's no redundancy to fall back on if you lose a motor.

That's going to make the TriFan 600 very tough to certify as a commercial passenger aircraft, so perhaps using the platform as an unmanned cargo drone might provide a more realistic way for this design to get airborne in a useful way.

Check out a video on the TriFan 600 passenger aircraft below.