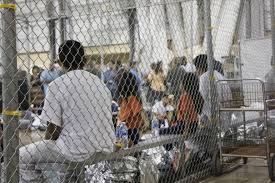 Obama was decrying the level of support that Trump received from hispanic voters during the election campaign.

"But there's a lot of evangelical Hispanics who, you know, the fact that Trump says racist things about Mexicans," Obama said during the interview with with The Breakfast Club radio show.

"Or puts detainees, you know, undocumented workers, in cages — they think that's less important than the fact that, you know, he supports their views on gay marriage or abortion, right?" Obama claimed.

It is more than a tad ironic that Obama begins by talking about how metropolitan elites can be out of touch with the rest of America, and then immediately goes on to pigeon hole Hispanic voters as only caring about abortion.

Are hispanic voters incapable of caring about economic issues or crime? Just because they are brown?

That isn't the most egregious aspect of his comments, however, given that he completely ignores the fact that for many years the so called 'cages' were used by the Department of Homeland Security under the Obama administration.

Situation Update, 5/27/22 - Uvalde massacre was a PLANNED STAND DOWN operation

As usual, Big Pharma is cashing in on all the monkeypox hysteria

Cops TASED Father Trying To Save His Daughter During Texas Tragedy,